User registration is disabled in this demo.

Please enter your username or email address. You will receive a link to create a new password via email.

Why We Love Bushwick

So you just moved to Bushwick AKA the 7th coolest neighborhood on this planet. Your moving boxes are barely unpacked and yet you already sense that there’s more to to Bushwick than secret warehouse raves, polyamory and celebrities parading themselves at Roberta’s. But how to learn all the basics you need to know? Worry not! Your secret Bushwick posse, Bushwick Daily, is about to give you a crash course on your new home!

According to City Data, Bushwick has approximately 80,000 inhabitants in the area of 1.305 square miles. 70% of Bushwick’s population is Hispanic. Black population comprises 15%. The rest is Asian, white, or mixed race.

It’s interesting to point out that according to the Furman Center at NYU, which studies land use, real estate, and housing and urban affairs, from 2000-2012 Bushwick’s white population tripled.

Fun fact: The most desired music genre in Bushwick is mariachi, according to data recently released by streaming music service Pandora. According to Spotify, Future was the most streamed artist in 2015 in Bushwick.

What is the actual size and borders of Bushwick?

Bushwick is a NYC neighborhood, and NYC neighborhoods don’t have official boundaries. Instead, the city recognizes the 59 community districts that were created in 1975; before that, the five boroughs were divided into wards. And before even that, Bushwick was the much larger Boswijck, which also included Williamsburg and Greenpoint. Today’s Bushwick lies within the borders of Brooklyn Community District 4, which is defined by Flushing Avenue, Broadway, the Queens border and the Evergreen Cemetery. These lines are clearly documented on the city’s website. BUT “community district” is unfortunately NOT a code word for “neighborhood.” (Look at Community District 1, for example, which is made up of five distinct neighborhoods—Park Slope, Carroll Gardens, Red Hook, Gowanus and Cobble Hill…) 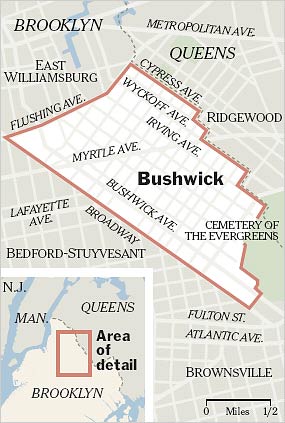